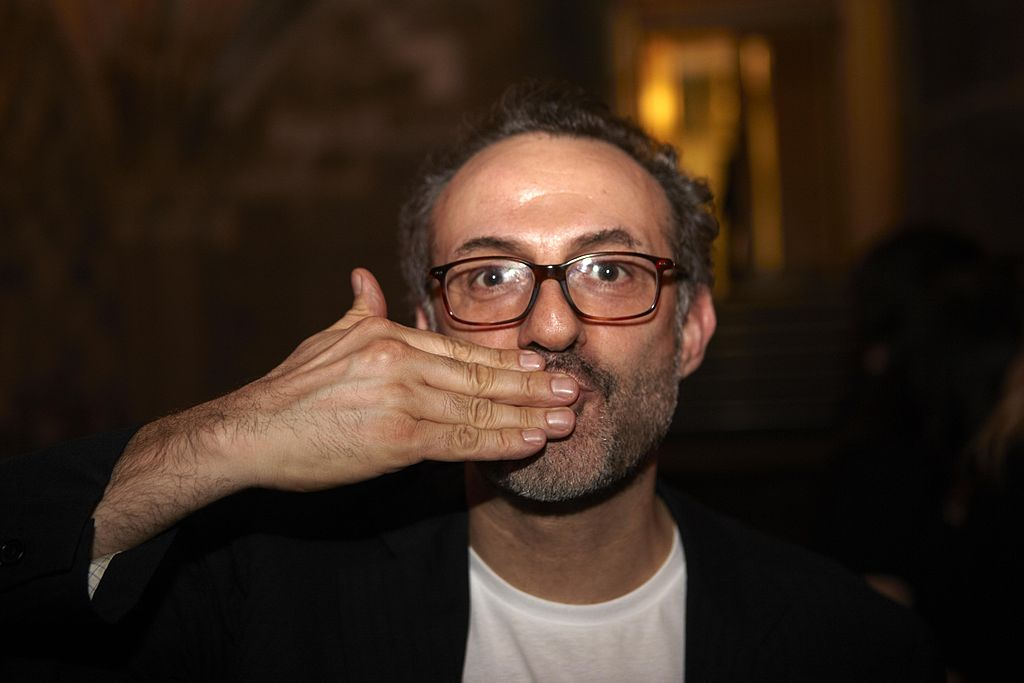 Massimo Bottura is an Italian chef whose cooking style is dedicated to the renewal of traditional Italian cuisine. He is regarded as one of the most creative chefs in the world. In November 2011, his restaurant, the Osteria Francescana, received the third Michelin star. Only a simple door and a highly polished brass plate indicate one of the world’s most valued gourmet temples. 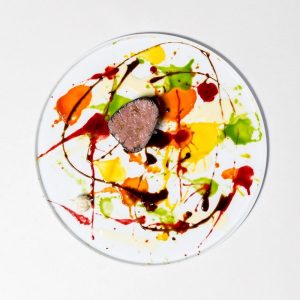 There is space for just twelve tables, the waiting list is long and every gourmet is happy to be able to eat here once. In 2016, the Osteria Francescana was voted the best restaurant in the world. The following year, it ranked second as the best restaurant in Europe. The Osteria then returned to the absolute top spot in 2018. Here he linked the world of fine arts with his own creative power in the kitchen. Together with his wife and art connoisseur Lara, he filled the architecturally rather simple rooms with sculptures, photos and paintings.

Although he appears as a star chef, anyone who listens to him will immediately notice that he is one of the most inspiring philosophers of modernity and a great artist. Again and again he draws clear parallels to music, art and literature with his dishes.

Like an orchestra conductor, Massimo Bottura conducts the almost 50-strong team and spurs them on to top performances again and again. The twelve-course tasting menu is a colorful dance of creativity and taste. “My cuisine is based on the centuries-old tradition of Italian cuisine, filtered through contemporary philosophy and our global experience,” says Massimo Bottura. His cuisine repeatedly plays with deeply emotional elements. Like an artist, Bottura is imbued with passion – for good ingredients, for good Italian food, for more humanity and less waste.

Massimo Bottura made his first culinary experiences in the kitchen of grandmother Maria Luigia. This is evident in dishes such as “The Crunchy Part of the Lasagna” or the “Tortellini alla Panna”, which are based on culinary childhood memories. Despite all the technology and precision in the execution, the focus here is still on direct sensual pleasure – in keeping with the tradition of Italian cuisine.

He is considered the philosopher among top European chefs. He draws his inspiration from the visual arts and in doing so, he himself becomes the Jackson Pollock of haute cuisine – creative, impulsive and courageous. In his dishes he tells stories, stages Italian landscapes and works by well-known artists.

True to his motto “Nothing is impossible”, Massimo Bottura uses avant-garde cooking techniques with imaginative ingredients and strives to develop Italian traditions further.

Chef Bottura is not only a creative spirit, he also stands for social responsibility. “A third of all food in the world ends up in the garbage, that’s a scandal!«” he says. As part of the 2015 world exhibition in Milan, Bottura launched a first project. Some of the best chefs in the world came to Milan at his invitation and processed the leftovers into tasty dishes, which were presented to the poor and needy in communal kitchens.

art, chef, italy, massimo bottura, michelin star, modena, star chef
Previous Post“Restaurante Central” In Peru Sends You On A Culinary Journey From The Pacific Coast To The Amazon
Next PostEmilia-Romagna, Home To Some Of The Best Food Products In The World